Popular Sierra Leonean singer and song writer Leonard, popularly known as I-Tribe, has taken on his social media to share throwback photo of him in Nigerian

The singer, I-Tribe shares photo revealing when he stated singing, according to the singer, he revealed that he officially started singing in 2013 after representing Sierra Leone In project fame west Africa in Nigeria

Leonard, popular known as I-Tribe, was born on the 17th of July. He grew up in the city of Bo and later relocated to Freetown the Capital city of Sierra Leone.

His primary education began at the services children cchool, and his Secondary school education was at the Albert Academy. He later furthered his studies to Fourah Bay College.

I tribe always felt that music was his calling, as he continuously dreamt performing on a stage in front of a big crowd.

in 2013, I-Tribe proudly represented Sierra Leone at project Fame West Africa, which took place in Nigeria. After his return, he joined Lord Mo and was recording and hustling for three years.

In 2018, I-Tribe signed to the prestigious label, KME (Kabaka Multimedia Entertainment) releasing his first single under the label titled Dai Lae. Then in Early 2019 he released a song with Rozzy, he’s co-signee. The song is titled Watasai stone and has been making huge waves since then.

Throughout his Career, he has collaborated with artists like Kao Denero, Rozzy Sokota, Collabo, Kracktwist & Samza, Kwami Eugene, Driz 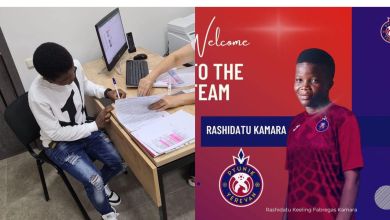