Dr Tamara Kaundahttps 27, a medical doctor who studied in China, made a fairly dramatic career change when she switched from medicine to the farming of seedlings in Zambia, Africa.

With a strong sense of how farming could serve families and grow their financial strength, she found it easier to put her medical internship on hold and go into agriculture.

What drove young Tamara Kaunda to swap her stethoscope for a seedling tray?

Tamara says she made the decision on her first day at the University Teaching Hospital (UTH). “It didn’t look like a place where a patient could recover. I wondered what good I could do there, when people could not afford decent food, let alone drugs.”

Tamara Kaunda says you have to do a 1000 days of hard labour to get a business going.

The granddaughter of Robert Kaunda, older brother of Zambia’s first Republican president, Kenneth Kaunda, Tamara was raised on her father’s farm outside Chinsali, in the north-eastern province of Muchinga. Here the older Kaunda brother grew bananas, cabbages, sugar cane, tomatoes and other fresh produce. He ran a productive farming business and was a successful farmer in the district.

“I realised that agriculture had really improved the quality of our lives when we were growing up. We farmed and my mother traded and sold the produce. Farming gave us our living, put food on the family table and paid our school fees,” Tamara explains.

‘Farming gave us our living, put food on the family table and paid our school fees’

Now the co-founder and CEO of Billionaire Farmer Agric Solutions, a vegetable seedling company in Lusaka’s Silverest Estate, Tamara is creating credible evidence of farming as a viable option that can uplift the lives of many Zambians. Her motto is: “We can farm Zambia out of poverty.” 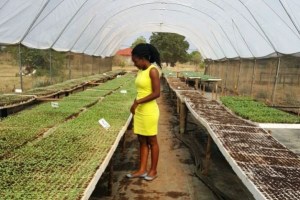 A TEAM IN A BILLION

Tamara formed a business team with her husband, Dr Chiluba Kunda, son of the late George Kunda, former vice-president in the MMD-led (Movement for Multi-Party Democracy) government. Soon to join the group were other family members Charity Nkonde, Mirriam Muwowo and Muwowo.

“Going into the seedling business was a practical decision. We had to make the most of our limited space and seedlings seemed the way to do it.” At first, the business grew in an organic fashion, as the Kundas bought second-hand materials as and when they could afford to.

After three months they planted the first batch of seedlings around their house, and 25 days later made their first sale. “We sold to less than five customers,” she recalls. “Then we hit a snag with our second batch of planting when power outages and water supply become a huge challenge.”

As if that was not enough, the only vehicle the fledgling business had access to, which belonged to Tamara’s sister, was written-off after an accident. Another hurdle for their start-up venture, by this stage desperately looking for finance.

As the business grew, second hand equipment was bought when it could be afforded.

Finally, a breakthrough from an unexpected source. The insurance pay-out for the vehicle gave them their first real start-up capital with which they funded the building of a greenhouse. It has been said that growth generates growth and this proved to be true for the Kundas business. “After that we began to build more greenhouses around the house.”

To apply ONLINE, please click the links below:
https://www.africell.sl/housemates/

Then Tamara’s mother gave them access to more land in Silverest, from where the company currently operates. “Because of our space limitations, we decided to cut down the mango orchard at home. My mother loves mangoes and offered us the use of her land in Silverest, so as not to lose the orchard.”

Tamara’s brother-in-law, Muwowo, immediately volunteered to work from the Silverest site, with only a tent as his basic infrastructure. Financial discipline, a strong work ethic, determination and personal sacrifice have now made it possible for Tamara and her team to buy a state-of-the-art 40m X 8m greenhouse.

“There is a saying that to become successful at business you have to do hard labour for a thousand days. My partners and I have done this journey, so success is bound to come.”

“There is a saying that to become successful at business you have to do hard labour for a thousand days.

Initially the company supplied customers in Lusaka, but it is expanding to meet a nationwide demand for vegetable seedlings, especially in tomatoes and cabbage. The customer base reaches as far as Mwinilunga, Chilubi Island, Kaputa, Chinsali, Vumbwi, Kaoma, Livingstone, Solwezi and Mkushi.

The team has also started training programmes in seedling cultivation as a way of empowering Zambians.

Good, solid partnerships are the foundation stones of a successful agricultural business, Tamara explains, as well as an important factor in the development of the business. “In our case funding was raised through family partnership and collaboration; the partnership remains the absolute rock on which we build our success right from the greenhouse to our client market.”

A secondary, but vital, focus is to create value for customers. “The value we consistently offer our clients makes us grow and is fully in line with our passion for quality and innovation,” she adds.

‘The partnership remains the absolute rock on which we build our success right from the greenhouse to our client market.’

A batch of cabbage seedlings. The first batch was sold to less than five customers, and then power failures and water supply became a great challenge.

“I don’t think preaching the message would have had much impact. Farming like this sends a powerful signal to young fellow Zambians who think an improved life revolves around having a job. It simply is not true. In fact most wealthy Zambians are actually running their own farms.”

She says it’s a pity that many young people continue the search for scarce corporate white collar jobs. Some outward seeking and inward reflection may give them time to think about getting into the farming sector she adds. “This is the best time to join the farming sector, where the future is promising for young people with some drive and a willingness to learn.”

A major percentage of Zambia’s estimated 13 million people is between 12 years and 35 years old. These are the people most affected by the high rate of unemployment and related poverty. The agricultural sector employs 75% of the nation’s labour force, either directly and indirectly. And 1.6 million smallholder households make up more than 80% of Zambia’s farmers.

Dr Tamara Kaunda says farming like this sends a powerful signal to young fellow Zambians who think an improved life revolves around having a job.

“I’m confident that Zambia can dramatically reduce unemployment and poverty in the next few years with an aggressive investment in agriculture. Yes, access to capital is a challenge but it can be overcome if government creates an enabling environment to attract young farmers,” she says.

When questioned about the name of her company, Tamara says: “The name Billionaire Farmer was an expression of our attitude and aspirations.” It is also the way she brands herself.

Nothing wrong with that kind of attitude.

On this day in Jamaican History: Cutty Ranks was born in Jamaica