A young University Graduate, Thomas Michael Salankole from Sierra Leone  Took Up To Be Volunteer After Seeking For Job Countless Times

“Today, being a volunteer on the CPD framework, I am also benefiting from the framework, as I continuously keep developing professionally through constant engagement with the framework.” 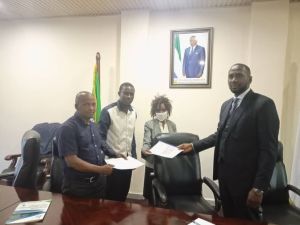 Thomas Michael Salankole however talked about the challenges young graduate engineers go through and call on the government and other bodies to do more in employing young people.

“A month ago I started volunteering for the Sierra Leone Institution of Engineers (SLIE), on implementation of the new SLIE/PERC Continuous Professional Development (CPD) framework.
Since graduation, I have been seeking job opportunities, from different companies, but the responses haven’t been really good. The institution reached out to young graduate engineers as myself to help in implementation of the already developed CPD framework by SLIE and PERC with support of the Royal Academy of Engineering. I being a graduate of the YOUNG ENGINEERS’ CORP, a graduate training program organized by SLIE, had no second thoughts about volunteering for the institution. Today, being a volunteer on the CPD framework, I am also benefiting from the framework, as I continuously keep developing professionally through constant engagement with the framework. In Sierra Leone, graduate engineers are challenged with seeking employment, and so constantly casts blames on institutions such as SLIE for not seeking their welfare. I used to have the exact narrative, so I took the opportunity presented by SLIE, to play my on efforts in changing this narrative. Ongoing efforts are being made by SLIE and PERC in upgrading engineering training and practice, and establishing engineering standard in Sierra Leone, but that can only be achieved through collaborative efforts of all concerned. So, I urge all professionals, graduate engineers, heads of Institutions, government through MDAs, to play their own efforts in making the engineering profession a reputable and laudable in Sierra Leone.
#engineering
#training
#development”