Struggling to get money to pay his fees at the Fourah Bay College, self-taught Sierra Leonean inventor, and engineer, Emmanuel Alieu Mansaray has completed his journey to build Sierra Leone’s first solar-powered car, he named “The imagination Solar Car’. He collected most of what he used to build the solar-powered car from trash and saved LE 10,000,000 (US$1,000) for the past three years from the little money his family gave him for lunch because he could not get support from many people he met and shared the ideas with. He used the money to buy Solar, headlight, traffic light, horn, cable, switch, mirror, and pack-light to invent the solar-powered car. Coming from a poor background, he made friends with some people who worked at the scrapyards at Hastings and Upgun where he visited after lectures to beg for scraps and collected the rest from the trash bin. He wanted to find out how he could be part of the 2030 Sustainable Development Goals focusing on ‘clean energy’ by inventing the solar-powered car like his ‘’imagination solar car’’ using solar-power for transportation that will make way for a cleaner atmosphere, thereby reducing the risk of dangerous gaseous emissions that have led to the death of thousands of people around the world.

Emmanuel Alieu Mansaray is a 24-year-old self-taught Sierra Leonean inventor, engineer, renewable energy expert, and a student of the Fourah Bay College, University of Sierra Leone, pursuing a Bachelor’s degree in Geology. attained his high school certificate from the Methodist Boys High School, Freetown. He invented the first ‘solar-powered’ car made in Sierra Leone. His passion for the environment and to solve social issues affecting his community led him to invent the solar-powered car. He called the car “The imagination Solar Car’.

‘Imagination Solar Car’ is Sierra Leone’s first locally made solar-powered car built from trash. It’s an Eco-friendly car, which does not use any fossil fuel to power it. The body of the car is built with bamboo (cane stick). This car can cover a distance of 15km per hour on a tarred road.

The ‘Imagination Solar Car’ has a large solar panel at the top of it which powers the engine and also acts as its canopy. The car has a self-made engine which is different from all other cars with three gears attached to it for both back and front movement. It has a left and right traffic light, a horn, four headlights, and an accurate brake system. It has two doors and two mirrors attached to its left and right flanks. The Imagination car was built as a result of the knack to invent creative technology in solving social problems in his community and country as a whole. So, he decided to create the ‘Imagination Solar Car’ to reduce the risk of contracting incommunicable and respiratory diseases like lung cancer, asthma, etc. caused by inhaling hazardous fumes emitted by cars using other types of fuel (fossil, gaseous and liquid).

Goal 7 of the Sustainable Development Goals talks about ‘Clean Energy’ and having a solar car like his ‘Imagination Car’ using solar power for transportation will make way for a cleaner atmosphere, thereby reducing the risk of dangerous gaseous emissions that have led to the death of thousands of people around the world.

solar-powered car is pollution-free, and it operates by converting sunlight into electrical energy using photovoltaic cells. Therefore, it does not produce harmful or hazardous emissions. Since solar energy is a renewable source, the sunlight that is used to power this car today will still be there tomorrow, and will continue to shine for years to come and so does the ‘Imagination Solar Car’.

At Salone Messenger, I had an interview with him to tell his story to the world. Here is what he got to say:

Q. Tell us about your invention and what prompted you to invent the solar-powered car?

“The Imagination car was built as a result of the knack in me to invent creative technology in solving social problems in my community, and my country as a whole. I decided to create the ‘Imagination Solar Car’ to reduce the risk of contracting incommunicable and respiratory diseases like lung cancer, asthma, etc. caused by inhaling hazardous fumes emitted by cars using other types of fuel (fossil, gaseous and liquid).

Furthermore, this solar-powered car is pollution-free, and it operates by converting sunlight into electrical energy using photovoltaic cells. Therefore, it does not produce harmful or hazardous emissions. So, since solar energy is a renewable source, the sunlight that is used to power this car today will still be there tomorrow, and will continue to shine for years to come and so does the ‘Imagination Solar Car’.”

Q. Where and how did you learn innovation?

Q. What’s the reason behind a solar-powered car?

“The reason behind inventing the solar-powered car is that I want the world to use cars that don’t use fuel. Because those vehicles that use fuel emit poisonous gas to the atmosphere which affects the oxygen that we inhale which hurts the human body causing respiratory illness. Also, people with disabilities do not benefit from the environment; meaning the environment they’re living in is not friendly. For example, they (people with disabilities) normally encounter discrimination in public transport. Most times they (people with disabilities) don’t allow them to onboard public transport vehicles because of their disability. Some disabled people have cars that they can’t drive unless they paid individuals to drive them because their feet can’t reach down the clutch, brake, and accelerator, which is challenging. But for my ‘Imagination solar-powered car’, all the features are installed in the steering; including the clutch, brake and accelerator, and all other necessary features. With all this, every disabled person can drive with less to worry about. These are some of the main reasons I invented this solar-powered car.”

Q. How many kilometers does the solar-powered car cover?

Q. What are your dreams and aspirations?

“My dreams and aspirations, I just want to help my people and the country as a whole. I want to fly the Sierra Leone flag higher above all other flags. I want to enable a safer environment for my people wherein they will use renewable energy that can be beneficial for them, especially when it comes to health. I want to make everything seems easier for people and make the environment safe. If we are hearing about global warming and climate change, it’s because of the use of fossil fuel, generators, machines, and vehicles. My dream is to work for my country, have a successful career, and  help develop my  country, Sierra Leone.”

Q. What are some of the challenges you’re encountering as an inventor in Sierra Leone?

“The challenges are numerous. Ranging from lack of funding, lack of sponsorship, lack of mentorship, and lack of raw materials to do my job. Sometimes I go to the dumpsites, dustbins, and scrap yards just to get the materials I need to do my work. It’s very difficult to have brand new materials to do my job. Sometimes I meet people for help and they don’t. Some people won’t even motivate me, instead they’ll try to kill my dream with negative energy. Some people are seeing me doing a great job, all they’ll have to say is “this is nice, this is good” but they won’t ask me what I need or want or what are the resources I need to do more than this. The challenges are plenty. No opportunities for young people, no laboratories to experiment with certain things, and some components I used to work on are not available in Sierra Leone so I have to buy them online. There’s no structured market system to have the right materials I need for my work. The challenges are plenty!”

Q. What message do you have for potential sponsors and the government?

“My message to people that would want to come on board and help, this is just the beginning. I have a lot of inventions that will solve pressing issues that affect our environment and the country. I’m ready to give solutions to those problems. Solutions to electricity problem, water problem, and also health problems. The solutions are plenty that I have in store. I’m hoping for any opportunity or sponsorship or funding, I promise to give them my best. I’m ready to help, with my innovative ideas, people that are suffering in the rural areas in sectors like electricity, water supply, health care facility, etc. I’m ready to give a helping hand with my innovative ideas. Continue to trust in me and believe in me.”

Abu Bakarr Jalloh is a writer, editor, and storyteller. He was born in Bo, Southern Sierra Leone. Started his primary school at the Bo District Educational Council Primary School, Abu Bakarr Jalloh was the top pupil from primary one to three. In 2005, his family relocated to the capital Freetown where he furthered his primary education at the Holy Trinity Primary School, Kissy Road. Abu Bakarr Jalloh became a force to reckon with throughout his primary 4-6 at the Holy Trinity Primary School. In 2008/2009, he enrolled at the Ahmadiyya Muslim Junior Secondary School where he started his JSS 1-3 and he went on to top the list of the best student in the 2011 Basic Education Certificate Examination and also 7th best student in the whole of Port Loko District. In 2011/2012 he attended the Government Municipal Senior Secondary School where he attained his West Africa Senior Secondary School Certificate Examination in 2015. Abu Bakarr Jalloh is now a student of the Njala University, Njala Campus pursuing a degree in Bsc Agricultural Economics. He is a very brilliant writer, editor, and storyteller that is passionate about telling Sierra Leonean stories undiluted using a mobile phone. He is also keen on highlighting national issues affecting Sierra Leoneans. 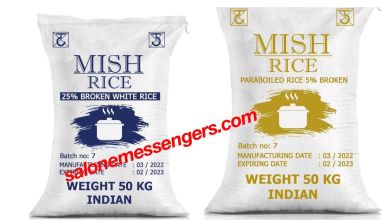 How Sierra Leone’ Ecofest Brought Psquare Together On Stage