As part of their objectives to undertake humanitarian and developmental activities, specifically targeting the fire victims of the Kroobay community that claimed the properties of 585 poor slum dwellers in the city of Freetown, Sierra Leone, Partnering to Serve Humanity Consortium ( Partnering to Serve Humanity comprises of Tzu Chi Foundation, Healey International Relief Foundation, LANYI foundation and Caritas Freetown) immediately planned a fifteen day hot-meal program for the victims at the ground zero of the fire disaster followed by the donation of food and non-food items On the 14th and 15th October, the relief packages  comprises food and Non-food items, school supplies and cash to support the affected families. The relief packages consist of rice, multigrain powder, Garri, sugar, cooking oil, palm oil, onion, blankets, mattress, plastic wares for domestic and kitchen use, charcoal stove and sanitary packs that comprise of bathing soap and sanitary pads worth millions of Leones to 585 poor slum dwellers fire victims. The  two days donation took place at the Prince Of Wales School Field in Freetown

On the 19th of September, 2021, a fire outbreak claimed the properties of 585 poor slum dwellers on the city of Freetown, Sierra Leone. The new spain zone is a densely populated section of the Kroobay slum which is closer by the coat of the Atlantic Ocean.

At about 6:000 PM, an outburst of hue and cry erupted in the community frightening about the explosive fire which was reported to have caused by an electrical malfunction though a high voltage electricity supplied by the national grid.

An alert call for the fore force to extinguish the fire never enjoined due to the lack of road access. Over 16 makeshift houses that housed about 120 households with a total of 585 persons were completely burnt to ground level and 18 other houses were partially damaged.

The victims eventually lost all their properties including materials for school going pupils, beddings, cooking utensils, clothing, cash and other valuable household properties.

Since they stayed displayed, many are still wandering in open and others are temporality accommodated in neighbourhoods.

The National Disaster Management Agency (NDMA registration pillar in collaboration with humanitarian partners registered the victims in the affected zone that has also been diagrammed by a drone device. The response is therefore coordinated by NDMA, with support from the Freetown City Council. 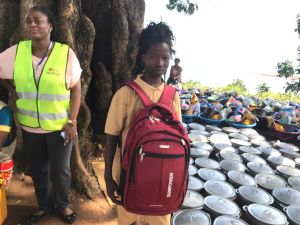 In his statement, the liaison person of  the relief packages, working for Caritas Freetown and Healey Foundation,  Ishmeal Alfred Charles, who is serving as the Laison disclosed that the Partnering to Serve Humanity Consortium ( Partnering to Serve Humanity comprises of Tzu Chi Foundation, Healey International Relief Foundation, LANYI foundation and Caritas Freetown are a non-governmental organization with one of its objectives to alleviate the suffering of victims of disaster by undertaking humanitarian activities, specifically targeting the underprivileged, vulnerable and marginalized group particularly women and children in the country, adding that it against such a backdrop they thought it fit to undertake such a relief effort at the Kroo Bay.

He added that when the fire incident occurred, the National Disaster management Agency reached to them immediately indicating that the fire incident has occurred and they wanted them to come in to help do the assessment, they did the assessment and registration and registered about 385 individuals from 120 families. ‘’ we then reached out to the Tzu Chi Foundation that is one of partners in Partnering to Serve Humanity seeking for support, on approval The Partnering to Serve Humanity consortium came and committed to be cooking and serving hot meal food for the victims for and initial 15 days and when the ExecutiveDirector of Caritas came the people reached out to him for a longer term he requested from Tzu Chi and the hotmeal feeding was extended to 21 days, as a immediate response”

He called on Sierra Leoneans to try as much as possible to discourage themselves from building or residing in very cluster environment to the point that if there is an outbreak in one house, it will continue to the whole community because the houses are too close, He also called on the government recreate social housing in these slum communities because it is always a challenge to respond to disaster all the time when it comes into shelter.

Sinatu Kargbo, a mother of two children express thanks and appreciation upon receiving her packages and calls on the government to support them build their house, she disclosed that they are currently sleeping to a neighbour’s house. She added add the immediate response from the Partnering to serve Humanity has greatly supported them in recovering from the sad experience.