Usain St. Leo Bolt was born this day (August 21) in Sherwood Content in Jamaica. His parents were Wellesley and Jennifer Boll who operated a grocery store in the rural neighborhood. He has a brother Sadiki and a sister Sherine. During his childhood, Usain Bolt played cricket and football and said that while growing up he didn’t think about anything besides sports. He attended Waldensia Primary school where he first showed his talent for running in the yearly national primary school meet for his parish. 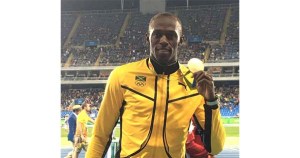 At 12, Bolt was the school’s fastest runner in the 100 meter distance. Upon entering William Knibb Memorial High School, Bolt remained interested in other sports, but his running speed was noticed by his cricket coach who encouraged him to give track and field a try. Bolt is the first athlete to hold world records in both the 100 meters and 200 meters. He is also the world record holder as part of a 4×100 meter relay team; He received Olympic gold in these three events and is considered to be the greatest sprinter in history. Bolt gained international recognition when he achieved a double sprint victory at the Beijing Olympics in 2008 with record times. He is the only sprinter to win 100-meter and 20-meter titles at three consecutive Olympics. Before his retirement in 2017, Bolt won 11 World Championships, winning consecutive titles in the 100 meter, 200- meter and 4×100 meter relay from 2009 to 2015.