There is a particular sensation that henna tattoo brings to our body. Each stroke and pattern imprinted is an art that soothes the skin. And an art that bridges cultures, whichever part of the world you come from.

Henna tattooing dates back to ancient Egypt, some 9,000 years ago. Its last reigning queen, Cleopatra is said to have used henna to adorn her body and even beautify herself. Egyptians also used henna to paint nails of the mummies before they were buried.

Here in Sierra Lone, there is one name that is known among the Henna Community.

David Musa Kargbo, a 23-year-old creative Henna Designer who drop out of school to do Henna Designing, David, like the stories of many young people is different, due to lack of money when he was going to school, David’s elder brother visited Sierra Leone in 2013 and introduce him to Henna Design, he learnt and started doing it for his friends in school who admired him. David quickly transformed this to business when he realised that his female friends in school liked and admire the work,  David paid his secondary and senior secondary school education through the little money he earn from the business, He sat to his WASCCE examination and got a complete requirement to enter university. David couldn’t enrolled to the university because of insufficient funds, he then resorted to doing Henna design to be able to raise funds to enter university.

David has been doing this form of art for over three 8 years now. He has worked for big celebrities and important personalities in the country.

“I am not actually a born artist, and I always try hard to develop it. This is my first form of art, I was taught by my elder brother when he visited us sometime in 2013. I was inspired and wanted to learn, fast forward to after I have learned, My female friends in school who I design for free admired my work” he explained. 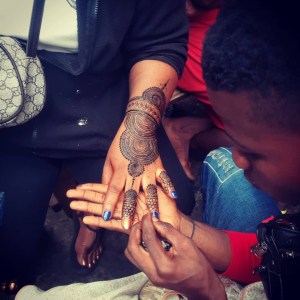 David started doing this art after he realized that he needed to engage on something that could help him raise some funds. He was 14-years-old when he embarked on this journey “I was a student and my friends were always encouraging me to do it on their hands, so I make henna for friends and students, it’s like a charity.” David disclosed to Salone Messenger.

A hobby that turned out to be a profession. Being a henna artist for 8 years in Sierra Leone brought her closer to the community. “I first started in my community at Upgun when they called me during Eid.”

There’s an explosion of demand for his service since he started working in Upgun. he has built his name in the country. Henna tattooing brought him to many places. “I get to interact with people, go to their houses. It’s a unique experience,” he said.

From Grass To Grace: Musa Tombo Just Made History At Afcon: Watch Video