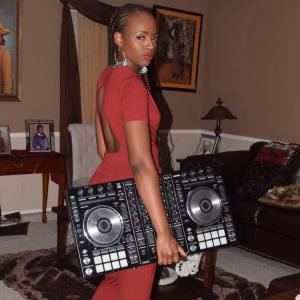 Her milestone came after years of building and consistently posting and creating content on her platform.

In another news, DJ Omu is sitting on over 50,000 followers on Instagram making her the first Siera Leonean DJ to hit 50 k on Instagram. 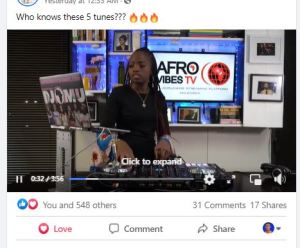 In an obviously male dominated industry, Jeanette Omu Miler aka DJ Omu has been able to create an identity for herself by being consistently creative and adventurous with her craft.

Born and raised in Houston, Jeanette Omu Miler popularly known as DJ Omu is a 32-year-old Sierra Leonean-American female DJ, dancer, promoter, advertiser, content creator, producer, model and founder of the moredjomu.com) store, aside of Djing, Omu is also a 7th grade math teacher and coach. Omu graduated from the University of Texas at San Antonio with a Bachelors in Kinesiology. Omu embarked on a journey to build her brand and use her platform to positively affect the lives of others, physically, emotionally, mentally, spiritually, and financially

Before DJ Omu embarked on DJing, she would rip any CD she found in his computer and download songs daily. Whenever she went to parties, Omu would study the music and how it affected the mood. Omu felt bad when DJs don’t take care of business and ruining the party.

Dj Omu has been playing professionally for about 8 years.  She started back in college as a house party DJ. Omu was always in charge of finding a boom box and playing the songs that she had collected throughout the years. The house parties become so frequent that she had to stop borrowing speakers from people and invest in her own. When she moved back home from school people started paying her for her effort and great work. Omu bought some professional equipment and gave her iPad a rest.

DJ Omu draws her inspiration from her family, friends, clients, and fans that want to her succeed. She has met so many people in her line of duty and they have given her nothing but positives vibes. They are excited to see how far she come and ready to see where she will go.