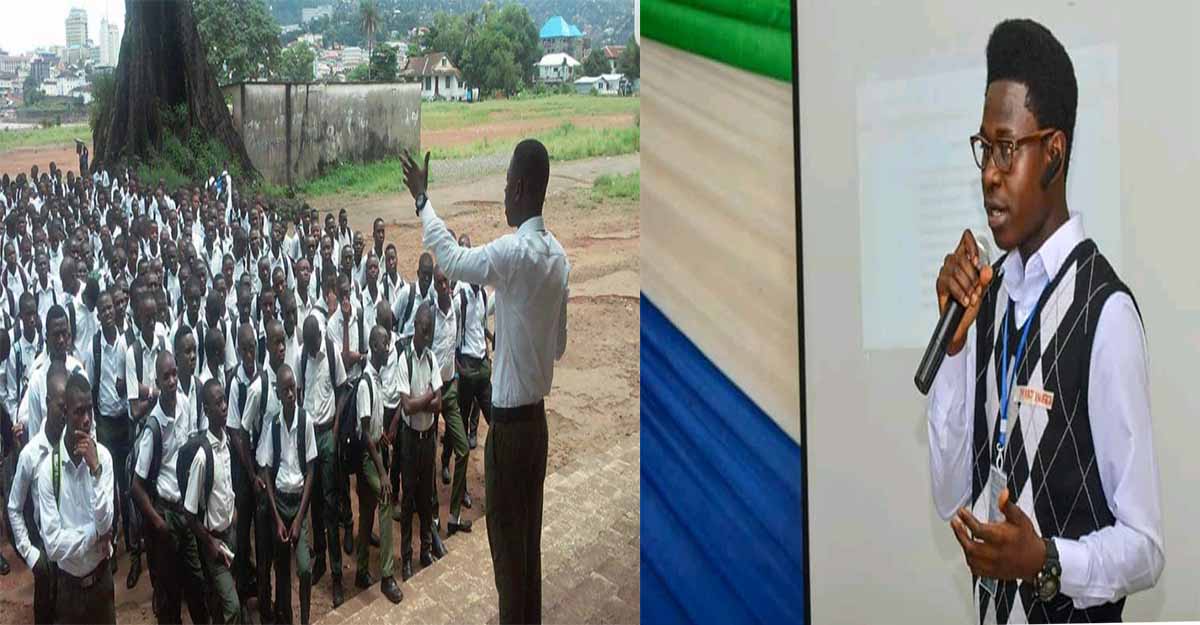 Augustine Martin Martinez is the founder and CEO of THE ANTI-GLOSSOPHOBIA ACADEMY which is geared towards vanquishing the anxiety and Dread in glossophobics and has created training opportunities for over 1000 pupils and students nationwide.

Born in the late 90s, Augustine Martin Martinezz is a young prolific Sustainable Development Goals (SDG) Ambassador;  serving as the Minister Of Information and Communication in the  Students’ union Government at IPAM;  Ambassador for the Mohammed Bin Rashid University (MBRU) Community Immunity Ambassador Program; founder of the anti-glossophobia academy and quest the anti-glossophobia tv-series and providing training opportunities for over 1000 pupils and students nationwide.

Augustine Martin Martinezz attended the Prince of Wales School after performing extremely well in the BECE.

He was the Public Relations Officer in the news journal and also became the Presidential Adviser for the Literary and Debating Society(L&DS)  and the elected President for the prestigious News Journal.

He sat at the WASSCE in 2017 and proceeded to the Institute of public administration and management [IPAM USL] where he had attained a Diploma in Procurement and supply chain. He’s currently a 3rd year potential Hons student Pursuing BSc Degree in Business Administration at IPAM USL.

Martin Martinezz made it to the Phoenix Books of world Records after serving as the youngest Speaker in the biggest offline youth Empowerment summit in the History of Africa. Organized by Helping hand International and VOHYO-I.

Martin Martinezz has facilitated over 500 Public Speaking, debate, and Mentoring training sessions for over 1000 Young people in Sierra Leone and other countries.

His humility cannot be overemphasized as he’s well known for his great sense of humor and humbleness.

Martin Martinezz has served as Speaker, training facilitator, moderator, Host, Committee Chair/Vice-Chairperson at over 200 Events nationwide and internationally both online and offline.

In 2020, he hosted the world champion of public speaking 2019 Aaron W. Beverly. Toastmasters International in his TV Series ’’Quest The Anti-Glossophobia’’

He is a personal consultant on tackling Glossophobia(The Fear Of Public Speaking) and a certified debate and public speaking coach with over a decade of Experience in the field.

He is currently the TV SERIES HOST OF QUEST THE ANTI-GLOSSOPHOBIA which is as well geared towards teaching its audience the art of public speaking on a TV series anchored ON MULTIMEDIA PLUS ONLINE TELEVISION and The Anti-Glossophobia Academy Facebook to help vanquish the anxiety and dread in people focusing mainly on pupils and students pursuing academic excellence.

He has been inspired by Amazing people like Aaron W. Beverly, World Champion Public Speaker in 2019, Prince EA an audio-visualize, and Dr. Amadu Bah a Young Medical Doctor.

Answer: I serve as a young professional transformational Speaker and Coach, who focuses on sharing my expertise in public speaking and other related art of communications.

Answer: In my first year in high school precisely Prince Of Wales Senior secondary school, I was opportuned to represent my stream/faculty inter-stream debate competition, where I was faced with the biggest and most embarrassing moment of my life. On that day, I first handedly expirenced both the verbal and physical signs of glossophobia. I was laughed at by everyone at the L&D’s session and was disgracefully critized of not being a good debater. Ever since then I started working on myself to defeat that fear in me of speaking in public. Therein, I establish THE ANTI-GLOSSOPHOBIA ACADEMY to help not only groom people become better spakers but also help both pupils and students navigate the fear of public speaking which will enable them to unleash their hidden and sophisted potentials and not to ever face or go through what I went through during my school days.

Answer: I have worked with and also volunteered for several organizations or institutions like NASSNET – National senior secondary school new network as a news presenter and Presidential Adviser, SLDC IPAM CHAPTER As a Public speaking Coach And subsequently Vice President for the same chapter. Patriotic Advocacy Network – PAN SL  as an Associate Member, IIMUN – Initiative for International Model United Nations Conference as a Chairperson for UNFPA Commitee, SIMUN – Sierra Leone Model United Nations As Chairperson for UNSC Committee and SOCHUM, DRIMUN as President of UNGA and many more…

Answer: It’s the fact, I have envisioned the impacts it will create and have seen great need to embark on such voyage to help make sierra leone and beyong a better place where people will utilize the skills of public speaking to better themselves and their societies.

Reflecting on your childhood or early youthful age, what was/were the difficult things you did to survive, acquire education or any of your dream?  Smiling, I smiled because I have done the odds and worse of things one could imagine, now just imagine coming from a humble background fron the interior part of the country where literally the quality of education or facilities are not available by any means unless you travel to the capital where everything is barely situtated. Standing out from there was barely a grace and also a myth but Alhamdulillah I am here today and also making the mark one could be proud of. The voyage continues.

They are as follows:

National and international exposition platforms and few others…

The yesterday Augustine Martin Martinezz who was disgracefully embarassed and laughed at.

What would be your message to Sierra Leoneans?

Answer: Dear fellow countrymen, with the ability to speak in a more constructive and effective way, nothing is insurmountable to handle and overcome. Remember to speak about it, proffer solutions to it rather than fight about it. “Rbykar waa” thank you all.