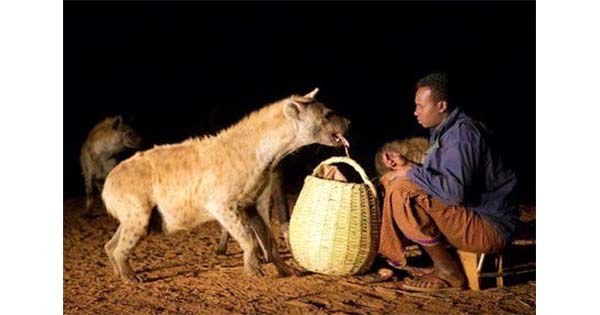 In the city of Harar, famed for its medieval walls and multitude of important mosques, a bizarre and enthralling spectacle occurs at night on its eastern outskirts. Abbas Yusuf – a 25-year-old resident nicknamed ‘Hyena Man’ by locals – feeds meat to Africa’s second-largest predator while crowds of spectators, paying around £4 per head, watch on in awe. 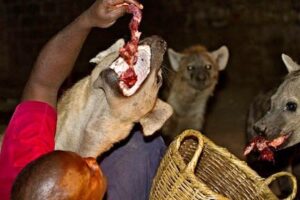 Hyenas are typically aggressive animals who have been known to kill people, but on the outskirts of Harar, Yusuf has nonetheless established a special bond with the animals that allows him to sit in their midst with perfect ease.

Far from behaving like vicious, depraved scavengers who demolish carcasses in a cackling frenzy – the prevailing view of hyenas in many cultures – they obediently wait their turn for the meat and then politely pluck it from Yusuf’s stick.

Often they even clamber over Yusuf, in a playful dog-like manner, to get to the scraps.

Yusuf, who took over the Hyena Man role from his retired father, is in fact building on an even longer tradition in Harar of peaceful co-existence with the hyenas.

For centuries, people in Harar have been deterring hyenas from attacking humans and livestock by ensuring that they don’t get too hungry. Holes were built in the city’s venerable walls and meat fed through them.

Nowadays, the hyenas also have free rein over the scraps that come from the city’s landfill. This strategy works well, while hyenas sometimes attack people in neighbouring villages, such occurrences are believed not to have occurred in Harar for over 200 years.

This tradition has now become entwined with Islamic practice: on the tenth day of the first month of the Islamic calendar and related to the festival of Al Ashura, locals feed bowls of porridge to the hyenas in special shrines.

If the hyenas eat the porridge, it is considered to be a sign of good fortune.

Yusuf’s bond with the hyenas is such that he has developed a special dialect to communicate with them and has special names for each animal. Incredibly, the hyenas have on at least one occasion even led Yusuf back to their den, where hyena cubs were living, demonstrating a very trusting relationship.

Even if somewhat unsettling to watch, there is something very endearing about seeing him feed, interact with and almost domesticate these wild and often feared animals. If you push 100 Birr his way, he’ll even show you how to do it yourself.

Despite the many interesting historic attractions in Harar, this unique event is the main draw for most visitors – and for good reason.