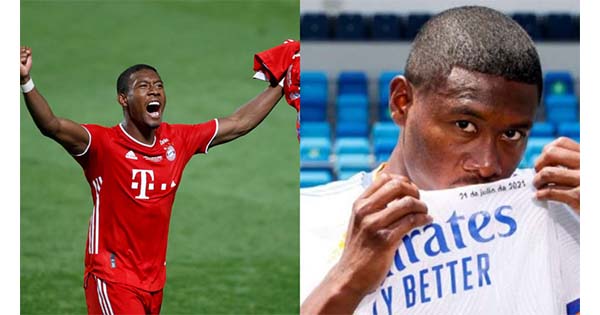 David Alaba after spending more than a decade of his career at Bayern Munich successful moved to join Spanish giant Real Madrid over the summer window transfer.

Alaba won virtually everything a player can dream of with Bayern Munich and opted for a Madrid because he wanted a new challenge.

The versatile defender seem to be enjoying life in Madrid playing two league games so far winning 1 and drawing another.

However, a gesture of him kissing the Madrid team badge has sent signals to his former club Bayern Munich over his loyalty to his childhood club.

Bayern Munich president Herbert Hainer, said he was surprised by how former defender David Alaba kissed the Real Madrid crest during his presentation.

Alaba has taken over former captain Sergio Ramos’ no.4 shirt at Real Madrid after switching from the German champions this summer.

“I was surprised when he kissed the Real Madrid badge after having spent so much time with us, but that’s life,” Hainer told German newspaper Bild.

People attach different meaning to players kissing the badge and that of the Bayern Munich President is not the same.