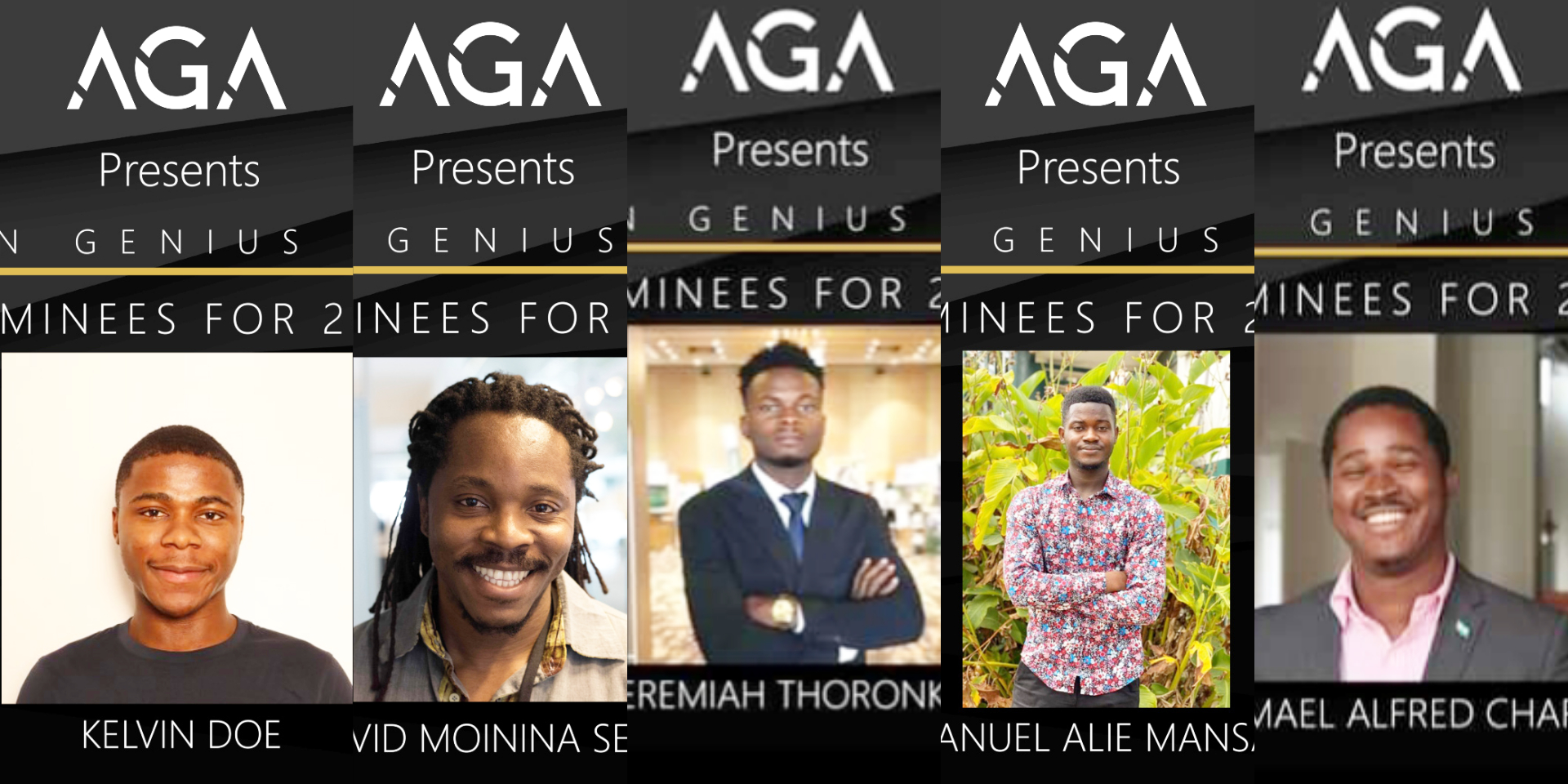 The African Genius Awards are a special project undertaken by the company Priority Performance Projects based in South Africa. They aim to recognise exceptional Africans that have made an outstanding contribution towards the realisation of African self-determination, dignity and exceptionalism. Due to the nature of African problems, The African Genius Awards recognise the impact of lack of problem-solving skills, tedious processes and costly methods of commerce and social resourcing and mobilisation. Exceptional skills in these areas are, among other skills, taken into account in the awards.

The first edition of African Genius Awards took place on May 25 this year at the prestigious University of Pretoria, South Africa. Due to Covid-19 restrictions and regulations, the awards were held virtually. Three African geniuses were announced as winners from the dozens of nominations received. These individuals, past and present, in one way or another, have contributed immensely to the development of their countries and communities through activism, business, and literature. These three men (Aliko Dangote, Steve Biko, and Chinua Achebe) awarded by African Genius Awards are amongst the most celebrated and the most popular Africans in Africa and beyond.

Here’s a brief background about the five Sierra Leonean nominees for the 2022 African Genius Awards:

Kelvin Doe – Kelvin Doe is a prodigy and talented genius born, in Freetown, Sierra Leone, on 26 October 1996. The youngest of five children of his parents, Doe comes from a small area in Freetown where a lack of electricity and water is common. Sometimes there is no electricity for weeks. At 10, he started collecting discarded devices, and scrap metal. He started creating something new from that garbage, and built transmitters and batteries from discarded pieces of scrap. He participated in GMin’s Innovate Salone idea competition and became a finalist; in which he built a generator from scrap metals. He is famous for teaching himself engineering at the age of 13. When Doe became 15, he built a radio transmitter, three-channel mixer, and microphone receiver. It all helped him to create his community radio station in Sierra Leone. He names himself to the name “DJ Focus” where he used to broadcast news and play music. In 2012 an educational YouTube channel THNKR captured his story in their video which attracted people’s attention. His story became viral in the whole world and then CNN, NBC News, and The Huffington Post covered his story.

Dr David Moinina Sengeh – Dr David Moinina Sengeh is a Research Scientist at IBM Research Africa, Nairobi, Chief Innovation Officer at the Directorate of Science and Technology, Government of Sierra Leone and the current Minister of Basic Education in Sierra Leone. His research is at the intersection of applied analytics/machine learning and healthcare with a focus on Africa. He was born and raised in Sierra Leone, received his PhD at the MIT Media Lab, where his research in the Biomechatronics Group focused on the design of comfortable prosthetic sockets and wearable interfaces. This work was at the intersection of medical imaging, material science, human anatomy, computer-aided design and manufacturing. David is on Forbes 30 Under 30 in Technology for 2013, a 2014 TED Fellow, on the Wired Smart List 2013, winner of the Lemelson-MIT National Collegiate Student Prize, and won many other awards. He has been invited to give talks at institutions like the United Nations, corporate and academic organizations on topics related to education, youth innovation, prosthetics design and more.

Jeremiah Thoronka – Nearly three quarters of the population of Sierra Leone struggle to get access to electricity. Jeremiah Thoronka created a device that harnesses the power of vibrations in bringing light to communities in Sierra Leone in energy poverty. Jeremiah Thoronka developed a more sustainable energy system. Thoronka’s energy solution was to invent a device that would provide people in his community with clean, affordable and reliable energy. Jeremiah Thoronka founded Optim Energy, an innovative start-up that uses kinetic energy – the energy objects have when in motion – to generate clean electricity, when he was 17 and studying at the African Leadership University in Rwanda. He developed a piezoelectric device that harnesses energy from heat, movement and pressure – all which occur naturally in the environment. When the device is placed under a road, in an area with a lot of traffic and passers-by, it absorbs the vibrations they create and uses them to generate an electric current. As nothing is being burned, no emissions are released in the process. He’s the winner of the 2021 Commonwealth Youth Awards and also among the Top 100 Young African Conservation Leaders.

Ishmael Alfred Charles – Ishmael Alfred Charles is the co-founder and Lead campaigner of The Sick Pikin Project. Ishmael Alfred Charles is a survivor of Sierra Leone’s brutal civil war. Kidnapped during the war by the rebels at 14-years old, Charles witnessed terrible horrors but this did not defeat him and from this experience he “always wanted to be someone who will help his community rather than destroy it”. Completed his primary education at the St. Edwards Primary school and his secondary education at the Prince of Wales School then proceeded to FBC. Started his career in serving humanity by working for Network Movement for Justice and Development on the Economic Justice Program focusing on Campaign for ‘Just Mining’, then under the Youth Empowerment Program in the Mano River basin. He later moved to the Center for Coordination of Youth Activities where he worked as a Senior Program Assistant focusing on youth engagement and participation. Championed the review of the 2006 National Youth Policy, served as a crucial voice in the youth empowerment drive and attended the Young Leaders Summit in Oslo. He served as an Adviser to the Women’s Refugee Commission’s “Out of School Youth Initiative program”. During his tenure at both the Network Movement for Justice and Development and the Center for Coordination of Youth Activities, he passionately advocated for young people’s constructive engagement and participation in decision making processes and was a civil society youth representative at the ENCISS board. Currently He is Healey International Relief Foundation’s In-Country Program Manager in Sierra Leone working with Caritas-Freetown where he doubles as the Programs Manager. He manages and monitors all . He studied Peace and Conflict Studies from the University of Sierra Leone and earned a certificate in International Humanitarian Affairs from Fordham University New York.

Emmanuel Alie Mansaray – Emmanuel Alie Mansaray, a 24 year old Sierra Leonean turned his vision to reality by making a solar-powered car made from trash and scraps that left many in awe. What you may not know is that this is not his first invention. He began his eco-friendly inventions from a very young age. He describes himself as a self-taught engineer, a creative thinker and a renewable energy expert. His inventions are focused on offering solutions to curb the growing rate of pollution in Sierra Leone. It has been rated as the 17th most vulnerable country in the world, when it comes to air pollution. According to him, there is a high risk of contracting incommunicable and respiratory diseases like lung cancer and asthma among others. These are health complications that are often derived from inhaling hazardous fumes emitted by vehicles using fossil fuel.

Nominations are still OPEN. Wouldn’t you want to be recognized as an African Genius? Nominate yourself or your friend, family member, neighbour, mentor, to be next year’s African Genius. It’s simple, easy and quick. All you have to do is go to www.priorityperfomance.co.za and click nominate.