Mount Aureol, is a community that is located North-East of Sierra Leone’s capital, Freetown. The community host one of the most prestigious universities in Africa, the Fourah Bay College. The community has a beautiful landscape and a hill-top view of sight. The community is being described by many as one of the most deprived communities in Freetown, and one of the most violent committed crimes in Freetown. Clashes between the gang and clique members are very common. The Mount Aureol community is like a ‘Red Zone’ where the strong can survive. Many of the kids and youths in this community are school drop-outs, victims of early marriage, teenage pregnancy, which only a few could make it to the university. Domestic violence is the order of the day. Many of the kids have experienced domestic violence, which negatively affected their mental health, and this, in turn, leads them to become gang and clique members. The community is being termed as the “home of gangsterism”. According to Tripmondo, the community has a safety score of 3•4 out of 5•0 based on data collected from authorities. Most of the basic human facilities can’t be fully accessed in the community. Basic facilities like good roads, hospitals, electricity, access to safe drinking water,  security, and many more. But despite all odds, this community has a number of young talents that to be taken care of and guided.

Like many, Edward Zito Johnson is one of those kids that is being mentored and coached by DJ Greatness.  Edward Ziko Aka Zito Pammer Aka ”Crawo” is a product of Mount Aureole. Born on the 15th of October 2005. The 14-year-old Edward Ziko Johnson is a pupil of the Albert Academy School whose video was recently uploaded on Facebook with him rapping in his School uniform.

Nickname Zito spammer A.K.A ‘’crawo’’ which means crust was born at the Mount Aureol community, a deprived community that lacked water, access to good road, violence, and school. He has experienced violence going to school or returning home from school.  His passion for music started from experience growing up in his community.

Abdulai Alim Bangura AKA DJ Greatness is one of the few gems and kind-hearted young man in Mount Aureole. Fada P acts as a coach, mentor, big brother, father to these young kids growing up. He helps them abstain from violence and gangsterism. In his own little way, he has helped in sensitizing these young guys by creating social clubs.

We had an interview with the 14-year-old Crawo after his recent video uploaded on Facebook got thousands of views and comments.

Why do you want to do music?

‘’ I want to do music because it is my career, I want to play my part to make difference in the entertainment industry.’’

One of your music trending on social media, news has it that you were suspended from your school, was this true?

No. it was false news, I was not suspended, I was just asked to write an apology to the school and old boys which I did’’

Who inspired you to do music?

”Drizilik inspired me to do music, I like the way he put his Bass together using our local language Krio and his personality as we’’

If you have the opportunity to do a song on Corona sensitization with Drizilik, how would that make you feel?

‘’it will be a dream come true, It has always been my dream to do a song with him someday whenever I watch him on the TV perform’’

What do you want to become when you finish school?

‘’I think rap can be used to send out a message, if I finish school, I would want to focus on music to educate my peers to distance themselves from violence, I am growing up in a community where violence and drug abused happen every day. I believe with my voice, I can make a difference.’’

Your education and music, which of the two do you set as a priority now?

‘’education is my topmost priority, the support I need now is for someone or institution to support me educationally, I live in violence and deprived community where many young people have dropped out of school because of school fees or been influenced by bad friends, I want to stand out and use my talent to preach peace, love, and unity’’

‘’If I Become President'’ Episode Nine’ 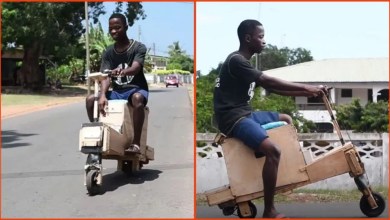