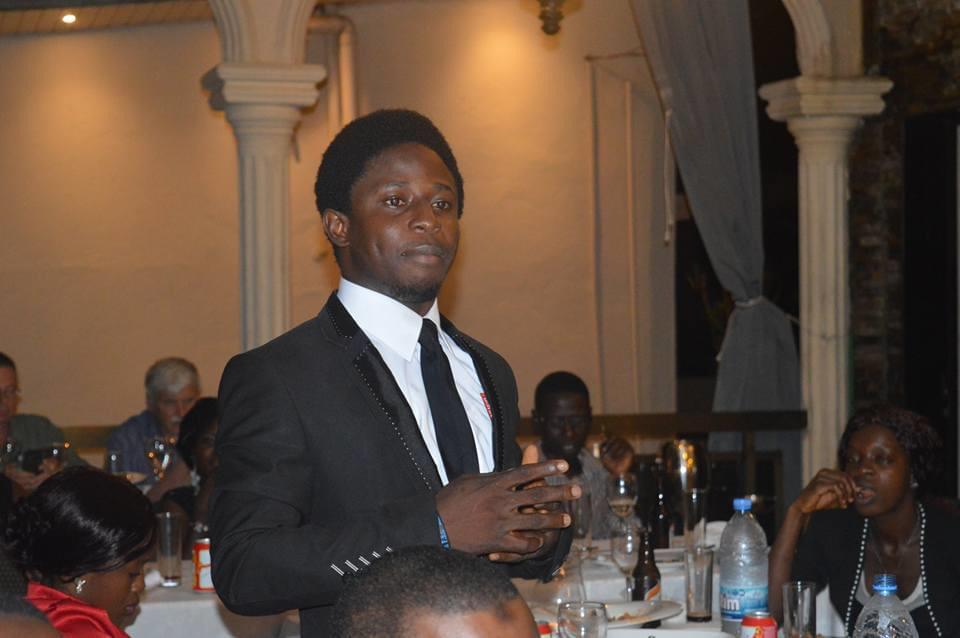 The young vibrant and inspiring leader who believes ‘’pen’’ is the most powerful weapon he can use to change the world, Sierra Leonean broadcast journalist David G Turner was born in Freetown during the long decade civil war.

After his experience growing up as a child during the war, hearing the sound of Guns of all types, her mother took him on her prime trying to save her from rebels. Turning to a man, he spent a couple of years seeking answers to alternate with a gun, killing and hands been lamed. He felt the war was never an answer to our leaders to ensure that we expressed our dissatisfaction.  He found his way during his early age in the world of advocacy and journalism.

During his school days at Albert Academy, Mr. Turner was the Publicity Outreach Coordinator of the Literary Debating Society (L&DS) in 2011. While at FBC, he helps students with tutorials on Foundation Skills and Mass Communication-related modules.

He holds a Bachelor of Arts degree with honors in Mass Communications with a specialty in Broadcast Journalism from Fourah Bay College, the University of Sierra Leone. He is currently pursuing his second degree in Law at F.B.C.

The young vibrant and inspiring leader is not a stranger in Sierra Leone’s media landscape and as such, he has served as a senior presenter of Voice of Children – Radio Mount Aureole 107.3FM in 2008 and a founding member and Chairman of Star Pikin Tok – Star Radio 103.5FM in 2009. During his regime at Star Radio, he is widely considered as one of the best and longest-serving Chairmen of “Star Pikin Tok”. It was during his leadership era that the Children’s Forum Network recognized Star Pikin Tok Radio Show as the “Best Child-Friendly Media Program of the Year in 2011.” In 2016, he became the Communication’s Officer of Organization of African Youth (OA-Youth) Sierra Leone Chapter. OA-YOUTH is a continental based organization that has its branches in many African countries.

From 2015 -2017, David G Turner was a senior television presenter of Activists on Point TV Show at SLBCTV which was a sponsored program of Plan Sierra Leone. For over two years through this TV Program, this astute man used his advocacy skills in presenting enormous issues that are affecting children and young people in Sierra Leone.

Over the years, The young vibrant and inspiring leader has dedicated the greater part of his life to give back to society through knowledge. He has contributed positively to the field of academia through his writing skills – poetry, journal writings, books, etc. His passion for writing is exceptional. For him, writing gives life to the dead (uneducated).  Mr. Turner is the Head of Media and Communications of the Western Area Football Association (WAFA), and he is presently serving as a Media Committee Member in the ongoing Sierra Leone Premier League 2020 Season.

Over the years, he has worked as a reporter for the Africa Young Voices Media Empire – TV, Radio and Newspaper, and as presenter and reporter for CTN-Radio Mount Aureol. While reading his first degree, in 2018, he represented the Mass Communication Department at the Sierra Leone Debating, Essay Writing and Public Speaking competition organized by the Sierra Leone Debating Council FBC Chapter where Mass Communication was awarded as the best performing Department and also he (David G. Turner) took the third position in the Essay Writing Competition out of over 20 departments.

He has partnered with prominent motivational speakers in organizing motivational life-shifting programs for young people. These programs have helped many young Sierra Leoneans to unleash their potential.

Growing up as a child, The young vibrant, and inspiring leader has worked relentlessly in ensuring children are abreast of the Child Rights Act of 2007 and all other legal instruments that are applicable to children. From 2010-2013, David Turner served as  Acting Public Relations Officer and Organizing Secretary of the Children’s Forum Network.

In an exclusive interview with us at Salone Messenger in our new series ‘’IF I BECOME PRESIDENT’’ which is intended to flesh out opinions of Sierra Leone’s young emerging leaders and those in the street of Freetown on the future of a United Sierra Leone. Here is what the first thing he will do if he becomes the President of Sierra Leone, why and how?

If I become President what’s the first thing I’ll do, why and how?

What will be the first thing you will do when you become president?

The 1991 constitution is the grundnorm in the country. It’s no secret that there are so many loopholes in that document which is holding our nation behind. We have seen regime after regime using it with vengeance and leaving our country into shambles. We all saw what the last APC regime under former President Ernest Bai Koroma did. With over one hundred recommendations submitted by the previous Constitution Review Committee under the supervision of Justice Cowan of blessed memory, nothing was done with those recommendations. With taxpayers’ money, a huge budget was spent on that process with nothing to show for it. The public knows that our constitution is a very big problem as a nation. Lawyers interpret the laws based on their political interests. The constitution is not for a set of political parties or groups, but it is for every citizen; devoid of tribal or religious background. Thus, we need a new national constitution for a better Sierra Leone.

As a president, I know that the public has lost trust and confidence in our constitution due to the previous regime’s act of bastardizing the constitution. I will ensure that trust is regained by putting the right people to work on reviewing the constitution with sincerity and without political, regional, or tribal affiliation. This is a collective call where citizens will be informed on every step taken by the new constitutional review committee members. There will be a timeframe given with strict supervision from the office of the Attorney General and Minister of Justice. I believe with patriotism, these elected representatives will serve our country well for the good of all. After the reviewing process, parliament will look at it with a strong lens of objectivity and in the end I will sign. Our country needs a new constitution that is just for all and not for the chosen few.